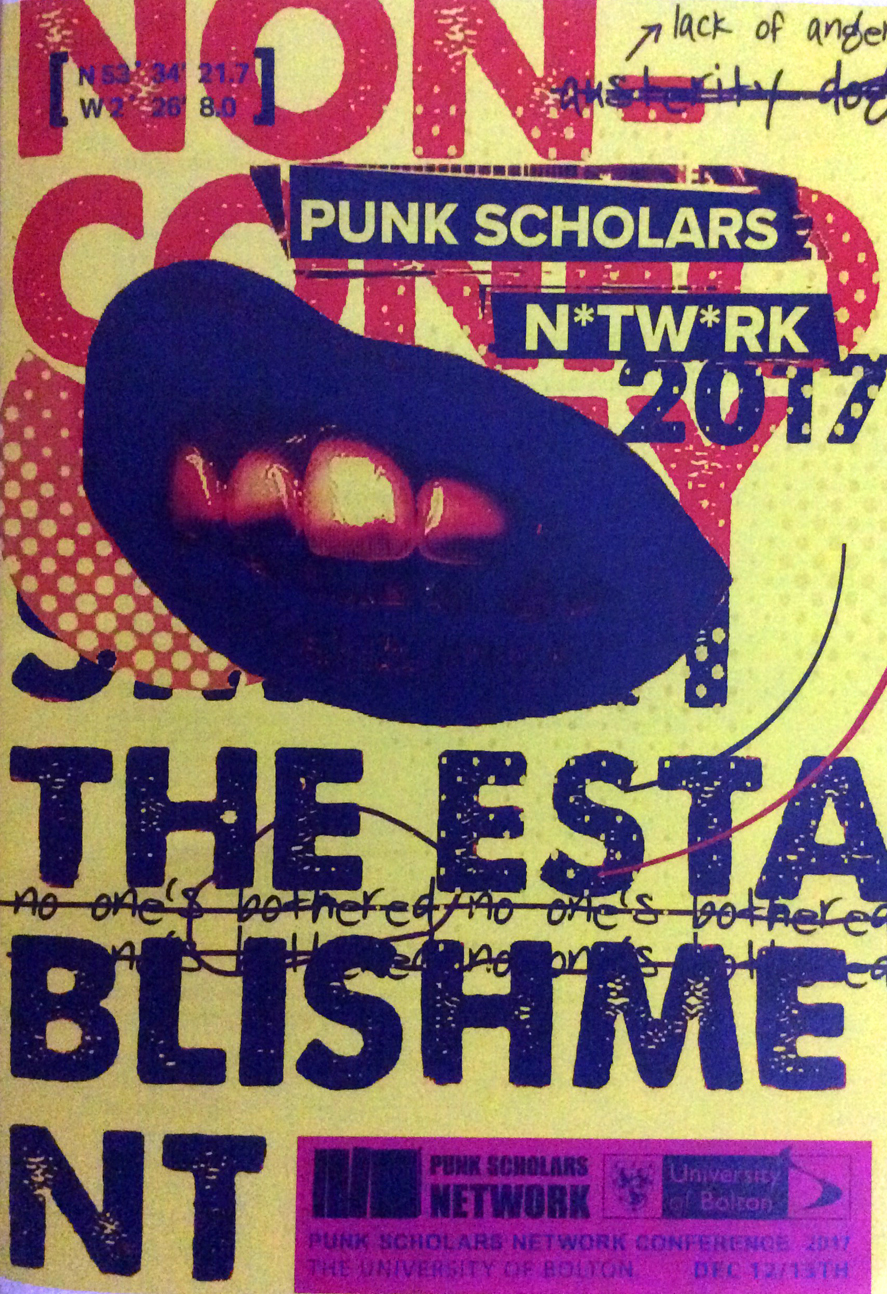 In 2017 I was invited by Professor Paul Hollins of Bolton University to be a keynote speaker at last year’s PSN17 conference. In mid December I was delighted to go up to Bolton to attend this fantastic two day event which featured many academic presentations on every angle of Punk imaginable – and from a worldwide perspective. On the first day of the conference I presented ‘The Purity of Punk: Fear & Loathing at the ROXY’, an illustrated talk on the exhibition I curated for the launch of the Seven Dials Trust’s ROXY plaque unveiling in April 2017. The accompanying ‘Fear & Loathing at the ROXY’ exhibition featured the works of the photographers, Derek Ridgers, Ray Stevenson, Jeremy Gibbs and Rebecca Hale. I went onto discuss at length Punk as a DIY subcultural fashion style, an instinctive expressive ‘look’ adopted by many early ROXY goers and how in the club this juxtaposed the Westwood/McLaren designs from SEX and Seditionaries as worn by many of the Bromley Contingent.  On the second day I was invited to take part in a discussion panel with (L to R) Gaye Black (Adverts), panel host Dr Rebekka Kill, Joolz (New Model Army and poet) and Jessica Schwartz (UCLA). The discussion was entitled ‘Oh Bondage Up Yours! Oh Bondage No More!’ and was about Women and Punk. Some of the presentations over the two days were very absorbing. In fact, the first morning I got there I knew I was in my element as Professor Paul Hollins of Bolton University gave an opening talk entitled ‘Men in Long black Coats’, detailing the origins of the Human League, Heaven 17, Clock DVA, Cabaret Voltaire, etc and set against the post Punk, industrial landscape of northern England in the late 1970s. All these bands begun at a grassroots arts project at a local arts space in Sheffield.   Another keynote speaker was Martyn Ware who came along to discuss the early Post-Punk beginnings of the Human League and Heaven 17 in Sheffield in the late 1970s. He was interviewed by Paul Hollins in a discussion called ‘The Mysterons Have Invaded the Northern Hemisphere’ and this proposed that (as John Peel once said) the Human League were imbued with the spirit of Punk. Another interesting quote related to the talk was by Daniel Miller of Mute who said that, ‘I saw electronic music as more punk than punk. You didn’t have to learn any chords, just press down on the keyboard and an interesting sound would come out’. There were so many great papers presented over the two days. I missed one by Martin James from Southampton Solent University called ‘High Wycombe: Fracturing the London ’76 Narrative’ about the role that the suburban home counties played in the emergence of Punk. However I did see Daniel Mekagon of DePaul University (USA) present a paper called ‘Shutdown: Policing DIY Punk Music Spaces’ which was a fascinating look at the way the police interact with current DIY Punk promoters who book house show spaces or volunteer-run music spaces – in domestic front rooms, garages and all manner of places. On Day 2 of the conference I watched ‘Assembly Required’ (this was great), a comprehensive visual documentary still in at the rough cut phase on the history of the Buzzcocks. This had been painstakingly assembled by Roy Wallace of the University of Northampton. Russ Bestley (seen below) from London College of Communication gave an excellent presentation called ‘The Devil is in the Detail: A Close Look at Punk Typography’ which scrutinised the range of distinct typographic approaches adopted within Punk visual communication. I really enjoyed this. Another speaker was Matt Worley (University of Reading) who presented a wonderful paper entitled ‘Suburban Relapse: The Politics of Boredom’ which focused on Punk bands that grew out of a suburban environment and New Towns such as Harlow, Stevenage, etc. Of course as I hail from the God-awful Crawley, I had to add this to his list…. Brian James comes from the same place and famously The Cure. Matt asked if I had read the new book by Lol Tolhurst on the history of the Cure, so I went to Foyles and have bought that. Really interesting.  I highly recommend Matt’s book – as seen below!  Another highlight of the conference for me was meeting the great designer Malcolm Garrett. He had collected for many years all manner of fashion pieces and ephemera – including Westwoods’ Seditionaries clothes, books, magazines, records, posters and other pop culture items – and these have now been absorbed into Manchester Metropolitan University Special Collections which anyone can go along to see and are excellent tools for research purposes. In the paper ‘No Future: Punk in the Museum’ (presented by Malcolm and Stephanie Boydell from Manchester Metropolitan University) they discussed the issues raised in bringing his personal, universally relevant group of objects into the museum. The PSN conference moves each year and I believe it will be held in Leicester in 2018. I thought it was fantastic, I learnt a lot and enjoyed it immensely.  Below are some of the posters displayed in the ‘Times Up’ exhibition at the conference. 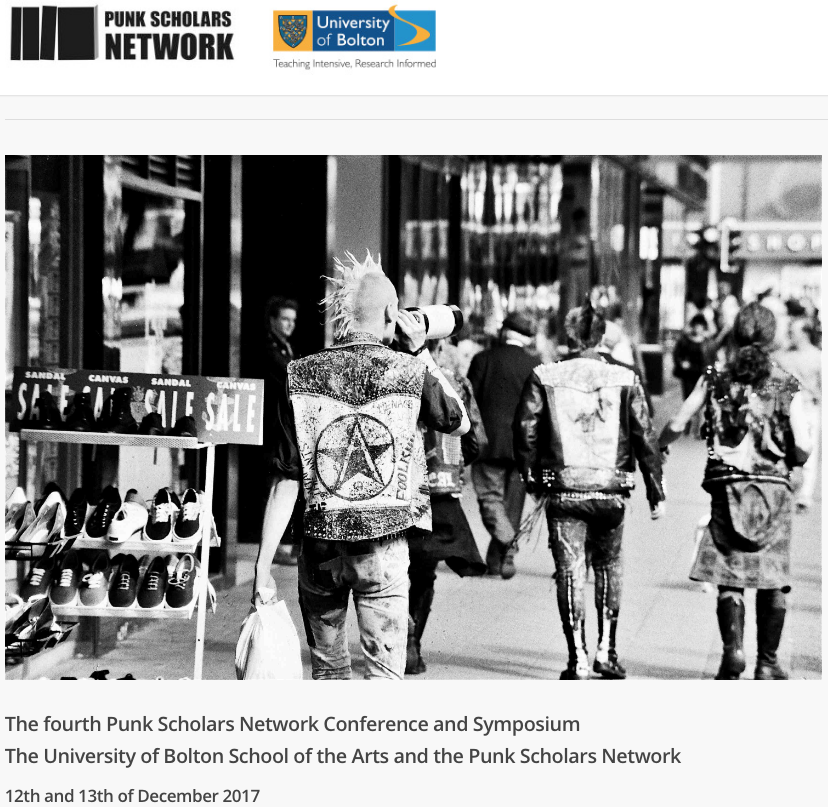 I’m delighted to be speaking at this years PSN17 at Bolton University (December 12th and 13th), upon my research findings and outcomes of the ROXY Plaque event and of curating the ‘Fear & Loathing at the ROXY’ exhibition at Neal Street, Covent Garden in May earlier this year.  I’m also really pleased the very wonderful Ms Gaye Black is coming to speak at the conference too! For more information see PSN17 Bolton University